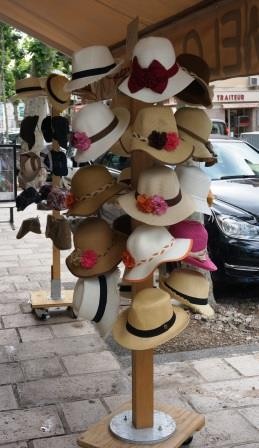 Travel is fun. Sometimes it brings new creative ideas and other times it reinforces your own. On my recent trip to France, I was delighted to see that dressy summer hats were IN, and what was I working on but the two remaining hat bands shown in my recent blog. 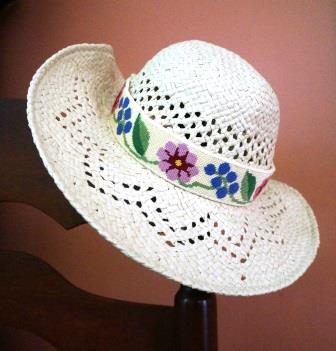 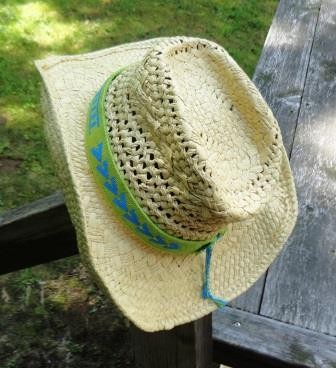 I put the American Indian floral design on a hat for my 3-year-old granddaughter. The hat band was longer than needed so I overlapped the ends when sewing it on the hat. That way, as she grows I can change the band to a larger hat. This design makes me think of weddings. Imagine a summer wedding with bridesmaids and flower girls in straw hats with floral needlepoint hat bands!

The Hawaiian Shark Tooth tattoo custom needlepoint hat band went onto an adult straw western hat. The band was a little smaller than the large hat so I made an adjustable button closure with braided thread to match as shown in the detail below. 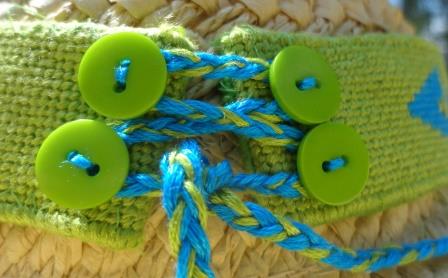 How to NeedlePoint, NeedlePaint Inspiration, Needlepoint

Tired of your old straw hat? When I went looking for a new straw visor there were none to be found.

Inspired by a book I was reading on Hawaiian tattoos, I designed a hat band of a traditional shark tooth design. It is a perfect design for Trianglepiont, which is quick and easy to to.  I mocked up a custom needlepoint design and was stitching 2 days later! 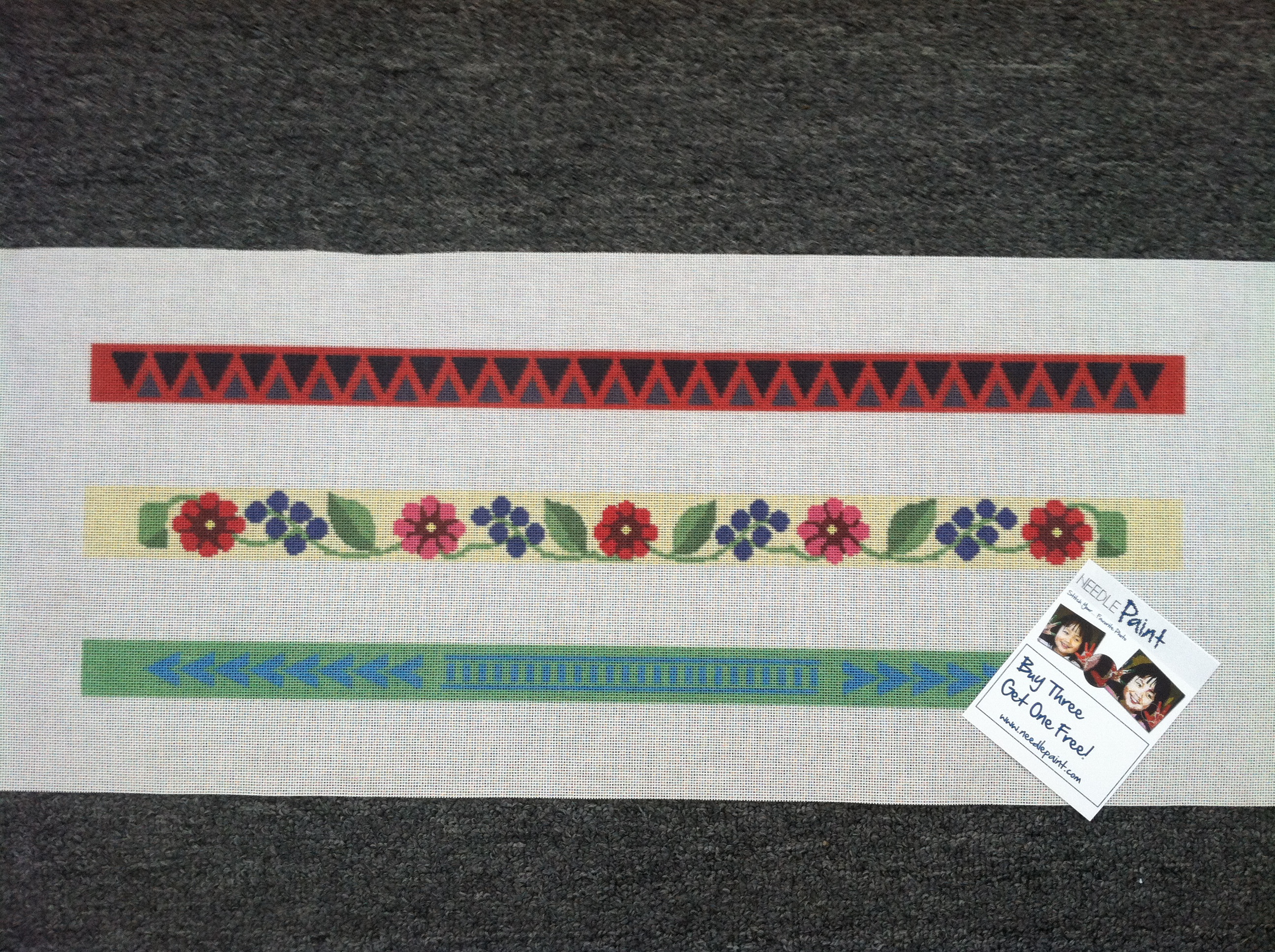 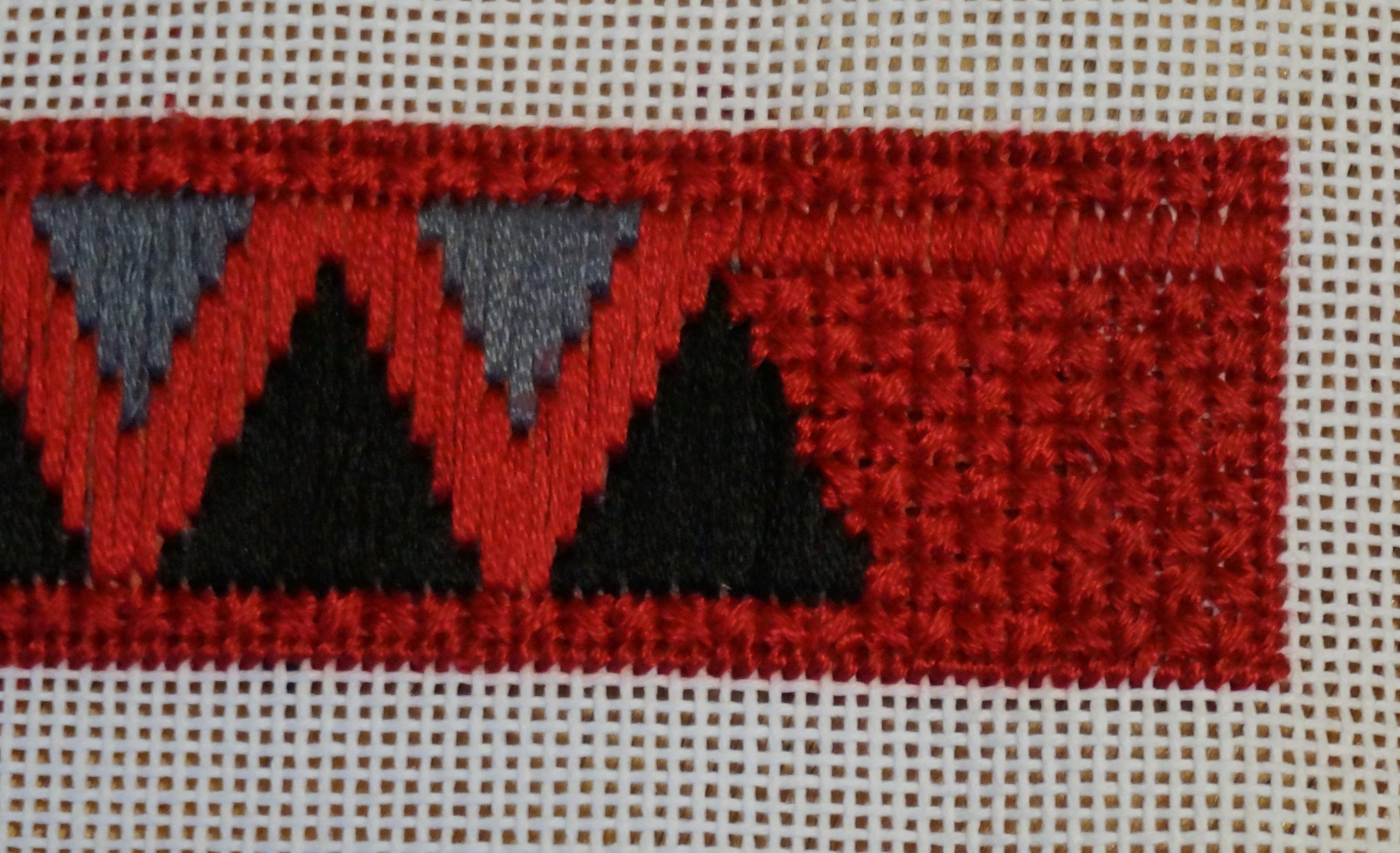 Each shark tooth is a trianglepoint and  satin stitch is used between the triangles. I finished the ends of the canvas with the reversed mosaic stitch as shown here.

There is a single row of the Continental stitch along each end to serve as the border for the finished overcast edge, which is described in my Needlepoint Napkin Rings blog. For the backing, I used wide bias tape which had to be trimmed down to the 1.25 inch width of this hat band.

I tacked the band to my old visor so it can be removed easily and exchange for my next project — an Hawaiian flower band which is on the stretcher waiting to be stitched. 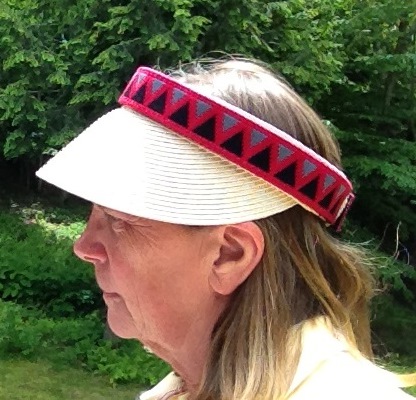 The visor is dressed up!

Peggy has been looking for projects to start this summer and decided to design some hat bands.

Two of these designs are inspired by Hawaiian tattoos and the other is a fun floral pattern.

She mentioned she designed the red one to do with triangle stitches, so stay tuned, I think she is going to work her magic!

These make fast fun summer stitching, so if you are interested in a custom needlepoint hat band, feel free to get in touch with your ideas and we’ll help create your own needlepoint design.