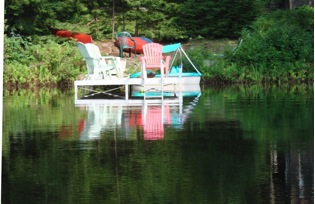 I had 2 photos from which to choose. 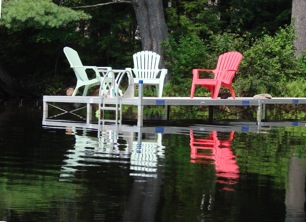 Dock2 by comparison was simple with the focus on the pink and white chairs with a good reflection in the lake. The background was not too detailed and the preview on Needlepaint.com reminded me of an Impressionist painting.

Next I decided that I wanted my finished Needlepoint canvas to be an 8 x 10 and on 14- point canvas. I made a copy of the photo and I used a photo editor to crop the copied picture to the 8 x 10 proportions. I cropped out as much of the background as possible, making the chairs the major element of the piece. 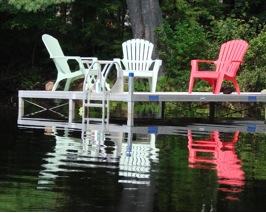 The first Needlepaint preview displayed the canvas with 20 colors. Although it looked great, I could see that it would be too difficult to needlepoint. There were too many different greens whose colors were so close that I would not be able to keep the colors straight. Also, these slight variations were not necessary. 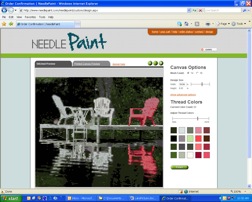 So I moved the Adjust Thread Colors slider on the website toward “Less”, and finally settled on a thread count of 10 with colors which were very close to the original preview. (Each time I moved the slider, the number of colors changed as did some of the colors. I tried many, many variations and even uploaded the picture several different times before I got exactly what I wanted. I just kept trying until I got my final choice.)

This canvas gave me enough definition to capture the idea of  the photo and to produce a canvas on which the colors would be easy to follow. And, it was the Impressionist effect which I wanted.

I ordered this canvas with thread. My Needlepaint shipment arrive 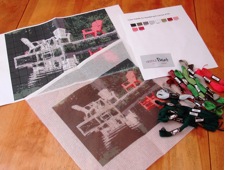 I put the canvas on my stretcher and was ready to go.

I started out being very careful to follow the gridded color print, but then I realized that I was Needlepainting this canvas. I could do use my pallet of threads to enhance or smooth over areas of the print. This meant that I didn’t have to worry 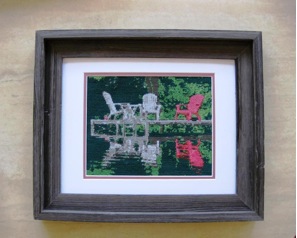 Finished Needlepoint of the Dock!

about the one light green stitch that was in the middle of the dark green. Or, if I wanted more light green in an area I could put it in. There was enough thread to make these changes as Needlepaint gave me full skeins of each color even it I only had a few stitches in that color. Also if I needed more, I could request more. I did need more dark green. I emailed Needlepaint and the thread arrived 4 days later in the mail. WHAT FUN!  IT IS PAINTING WITH THREAD with a little help from the printed canvas.

Once finished, I mounted it on Self-Stick Artboard (acid free).

Then I framed it with two contrasting matt boards. A wonderful memory of Summer, 2009.